You are here: Home / News / Stanley Cup comes to Madison 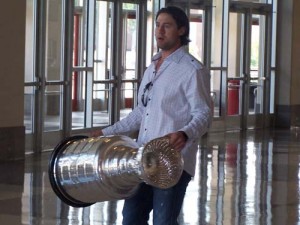 Adam Burish and the Stanley Cup

Several thousand hockey fans lined up at the Kohl Center in Madison Wednesday, for a chance to see the Stanley Cup and meet one of the Blackhawks players who helped bring it to Chicago this year.

Former Blackhawks player and UW-Madison alum Adam Burish brought the Stanley Cup to the UW-Madison campus as part of his allotted day with the cup. Each member of the winning team gets a chance to do whatever they want with the cup for a day.

Burish, a former captain of the Badger hockey team, says it just made sense to bring it back to a place that’s been an important part of his life.

Hockey fans of all ages took advantage of a chance to see the famous traveling trophy, with many wearing Blackhawks’ jerseys and carrying posters, hockey sticks, and pucks for Burish to sign.

Many viewers posed in front of the cup and quite a few also planted their lips on it to celebrate the occasion.

Burish now plays for the Dallas Stars after signing a free agent agreement over the summer.