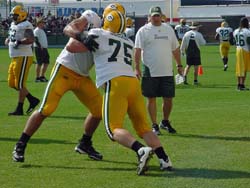 money if he earns a starting job with the Packers.

According to a report in the Milwaukee Journal Sentinel, Bulaga can earn an additional $5.4-million by becoming a starter in the first four years of his five-year deal.

Bulaga is currently battling Daryn Colledge for the starting left guard job in training camp.  Bulaga called that a work in progress.

AUDIO: Bulaga says competing at left guard is a work in progress :20