You are here: Home / Sports / Tiger is a mess as PGA Championship draws closer (AUDIO) 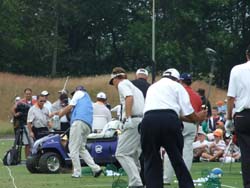 Mahan started the final round 4-shots off the lead.  He ran off 5-straight birdies on the front 9 to take the lead, then put together three clutch par saves to hold off Ryan Palmer by 2-shots.

Tiger Woods will remain number one in the World Golf Rankings for the 270th consecutive week.  But Woods is coming off the worst tournament of his career.  He closed with a final round 77 to finish 18-shots over par for the tournament, his highest score on the PGA Tour as a pro or amateur.

Woods is clearly struggling heading into the PGA Championship at Whistling Straits.  It’s his last chance to get it together this season, trying to earn a Captain’s pick for the upcoming Ryder Cup by American Captain Corey Pavin.