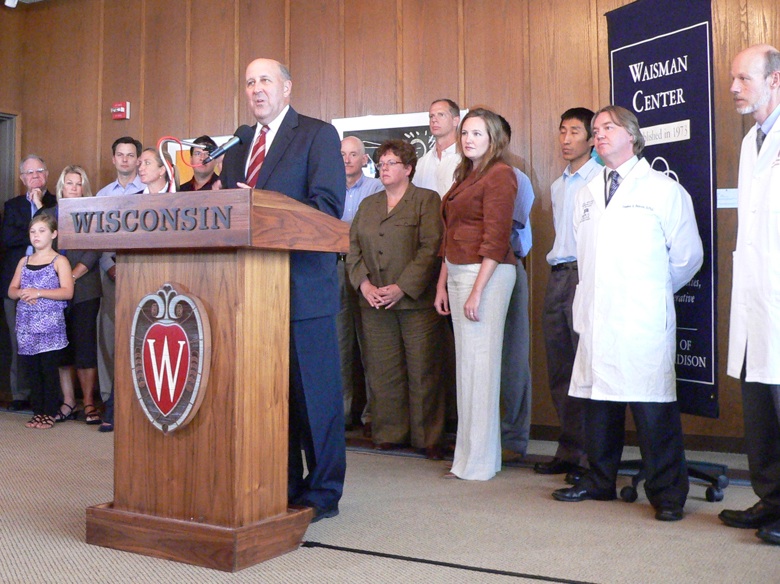 The state joins national efforts to ensure that federal funding is available for stem cell researchers in Wisconsin, so says Governor Jim Doyle at a press conference Tuesday afternoon.

Speaking at the University of Wisconsin Waisman Center; Governor Doyle says losing the millions of dollars in federal grants will be detrimental to Wisconsin’s biotech industry. He wants Congress to repeal the Dickey-Wicker amendment and he’s prepared to file a friend-of-the-court brief. “We will do it in conjunction with the University, and we will do it to tell the story about what this injunction means — what practical effects it is having on the scientific work that is being done.”

Kamp says this injunction will certainly slow down progress. “Without federal funding supporting our research on human embryonic stem cells certainly the work will go on around the world, and no longer will Wisconsin be in a central position or a leadership position, nor will the United States. We’ll be playing catch-up.”

Kamp says blocking research penalizes not only the scientists, but also taxpayers who are losing their investment, and patients waiting for new treatments.

Dr. Stephen Duncan with the Medical College of Wisconsin, says brutally withdrawing federal funds hits Wisconsin extra hard because of the lack of private contributions in our state. Also, he emphasizes the importance of training the next generation of researchers.

Duncan adds, it’s hard to justify staying in Wisconsin when he can easily go to sunny California where private sector funds are available for him to do the work he loves.