You are here: Home / Weather / Eyes on the levee 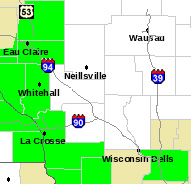 Authorities are keeping an eye on a weakened levee on the Wisconsin River while residents in Sauk and Columbia Counties have fled their homes. Kathy Johnson with Columbia County Emergency Management says although people had been told to evacuate their homes some ignored the order and might be stuck in their houses right now.

A partial breach occurred Sunday near Portage on the 100-year-old sand levee leading to flooding of an access road in the Blackhawk Park area where about 300 people live. DNR engineers continue to monitor the levee and prepare for possible failure of the structure.

Meteorologist Chris Kuhlman with the National Weather Service in Sullivan says rainfall from up north caused swelling in the Wisconsin River banks. However he says the river won’t be getting much higher as it’s expected to crest today. The river reached 20.3 feet, the second highest on record.

State Emergency Management officials continue to keep an eye on Central Wisconsin and have also turned their attention west to the Mississippi River. Spokeswoman Lori Getter says the Mississippi is getting a “double dose” of flood water from both Wisconsin and Minnesota. She expects moderate flooding of the river will remain until midweek.