You are here: Home / Brewers / Gallardo ends drought in win over Cubs 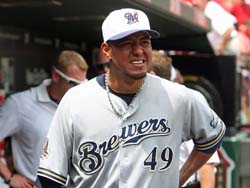 cause with a double and a run scored in the Milwaukee Brewers 2-0 win over the Chicago Cubs at Miller Park on Sunday.

It’s Gallardo’s first win since August 8th when he beat the Houston Astros, a span of 7-starts.

Casey McGehee homered in the 8th for the Brewers, who salvaged the final game of the series.

The Cubs held their opponents scoreless for 25 innings before Ryan Braun drove in Gallardo.  The Brewers hit the road for 6-games, three in Houston starting tonight and then three more in San Francisco starting Friday night.