You are here: Home / Military / On the anti-war corner for Obama visit 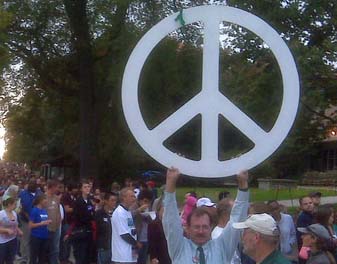 On a corner in Madison Tuesday, there was dissatisfaction with the president’s peace policies. Sherry Caves of Middleton said she expected more from Barack Obama on the war in Afghanistan. “I guess I was optimistic that he . . . would look at the costs of this war, the financial costs, the cost in human lives, ours as well as theirs, the kind of wound it is in our society. That he would find a way to help us get out of there, and do it in a way so that we could go on with our lives and we could go on with theirs.

So what are disaffected Progressives and Democrats to do in November? “Hold their nose and vote for Democrat,” said Joe Weinburg, who stood at the corner of University Avenue and North Park Street, dressed in a Hello Kitty t-shirt and holding a large, densely written sign overhead. “Otherwise we get more of the same. We get people who joyfully gut the government. We get Vandals and Visigoths. The Democrats are just sort of boring.”

“The war has not ended,” said Todd Dennis, when asked why many who voted for Obama are now disappointed. “He’s escalated into Pakistan with aerial bombing. I think to call himself a liberal is a farce if you’re going to wage war the way he’s waged war.” Weinburg said “it’s obscene” that the wars are continuing for no positive reason. Voters who oppose the wars, “should be working on building a movement to end war as U.S. foreign policy,” said Dennis. “The Democrats were elected to the Congress in the fall of 2006, and said they were going to end the war in Iraq, and they did nothing. Dennis said the U.S. troops still stationed in Iraq are still drawing combat pay. And then there are all those contractors. “He said eventually he would get us out of Iraq, but we have all the contractors there,” said Weinburg. “That’s a shuck too. We’ll be there forever. We built an embassy as big as the university campus here, and we’ll keep it full.”

“I hope he’s working on getting all the troops home from the longest war ever, Afghanistan, which has been going on for nine years, going on ten,” said a skeptical man named Steve from Mount Horeb, who was holding a large white peace symbol. “We want the troops home, we think that it’s a dead end.”