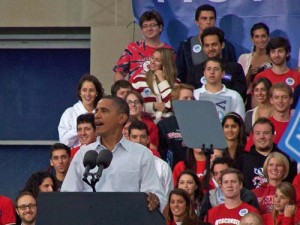 In a speech that focused heavily on voters who supported him in 2008, President Barack Obama urged students at UW-Madison to return to the polls again this November to keep fighting for change.

An estimated crowd of over 17,000 people packed into Library Mall on the UW-Madison campus Tuesday evening to hear the President speak. Obama spent most of his 40 minute speech talking about the battles he’s fought since taking office nearly two years ago, and how Republicans have opposed him every step of the way.

Obama said the GOP is counting on the apathy of young voters to win in November. He says those discouraged that his promises of change have not happened quickly should not just give up on the Democrats. Obama says letting Republicans back behind the wheel would only result in them fighting for “the very same policies that lead to the recession in the first place and put the middle class behind for more than a decade.”

The President urged the crowd, made up largely of UW students, to make sure that doesn’t happen by getting out and voting this November and encouraging others to do the same. 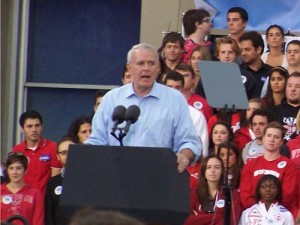 Obama was introduced by Milwaukee Mayor Tom Barrett, who is the Democratic nominee in the race for governor. Barrett, who faces Republican Scott Walker in November, says polls have shown that nearly 75-percent of those who support President Obama won’t vote this November. Barrett says voters must not forget that Republicans are responsible for many of the problems facing the nation, and it’s important that they not stay home on Election Day.

Republicans criticized Democrats for picking “the liberal” UW-Madison for a “TV-friendly crowd.” State GOP Chairman Reince Priebuse questioned whether President Obama would have received such strong report speaking in other parts of Wisconsin that have been “hard-hit by his economy.”