Mark Tauscher is entering his 11th NFL season, all 11 of them with the team 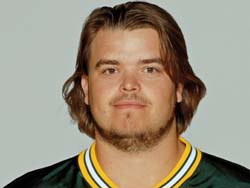 he grew up cheering for, the Green Bay Packers.  He’s gone through two reconstructive knee surgeries, the last of which forced him to miss a portion of last season.

Some thought Tauscher wouldn’t be able to return and be the effective player he once was.  But the Wisconsin native hit the ground running and turned out to be a calming influence on an offensive line that struggled for the first half of the season.  The Packers gave up 51 sacks last season, most of them coming before Tauscher returned.

Tauscher was born in Marshfield.  He played college football for the home state team, the Wisconsin Badgers, then joined his childhood favorite Green Bay Packers as a late round draft pick.  Tauscher bucked the odds and won a job with the Packers.   He’s been solid ever since.

One thing Tauscher hasn’t done yet is win a Super Bowl.  Many think the Packers will get that done.