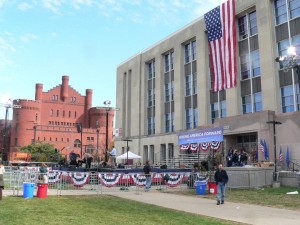 There’s excitement on the UW-Madison campus today, with President Barack Obama due at Library Mall for a late-afternoon rally. Students we talked with today seemed anxious to attend. “I think it’s just something everyone should come out and see,” said one student. “It’s going to be something that goes down in the books. It’s pretty legendary, especially for this campus.” It’s the first visit to the Madison campus by a sitting president in sixty years. Harry Truman made a UW stop in 1950. “I’m excited, but I have a test the same exact time that he’s coming, so it’s annoying,” said another student.

Security will be extremely tight for the rally on Library Mall, and not all students are excited. “He’s running this country into the (expletive) ground,” said one student. “I don’t agree with his policies, so I won’t be attending,” said another. A location for protesters will be set up on State Street, about two blocks from Library Mall. Obama is on campus to rally support for the campaigns of his party’s candidates in Wisconsin. He’ll be accompanied at the event by Milwaukee Mayor Tom Barrett and U.S. Representative Tammy Baldwin. U.S. Senator Russ Feingold will not be at UW – he’s in Washington, D.C. for a Senate vote.