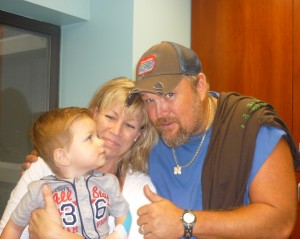 Thanks to Larry the Cable Guy, kids from Wisconsin and other states can get help rehabilitating from traumatic brain injury. The comedian’s foundation has donated $1.2 million to develop a new center in Lincoln, Nebraska.

“You hear all bad news.  You watch the news, it’s always this and everybody’s an idiot and every body’s a racist. It’s not true, America’s a good country and there is a lot of good giving people in America,” he says.

Larry’s wife Cara chose the Madonna Rehabilitation Hospital for their inspiring letter that brought her to tears. She wants the Alexis Verzal Rehab Hospital to be a beacon of hope for parents whose children have been from injuries such as being shaken or falling off their bike.

Wisconsinite Kellie Czarnecki of Neillsville (pictured) is among those using the resources of the new center. Her 18-month-old son Krue is recovering from an injury he received at daycare.

The center features advanced technology, such as the pediatric Lokomat, a robotic gait training device and one of only 12 in the country.