You are here: Home / Packers / Packers ran it when they needed to run it

After being totally dominated for much of the day, the Green Bay Packers 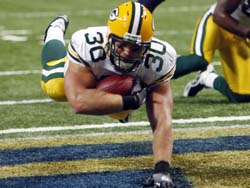 forced the Detroit Lions to punt and got the ball back with 6:32 to play.  It took them 12 plays to run the game out and beat the Lions 28-26 for their 3rd win of the season.

All told, the Packers as a team rushed for 92 yards.  Not much to write home about, but the way they finished is important.

AUDIO: Mike McCarthy on being able to run out the clock :22

John Kuhn said the offense takes great pride in being able to finish and talked about the final drive.

Packers center Scott Wells said the games final drive felt good for the offensive line, but there’s still plenty of work to do.

AUDIO: Scott Wells said they still need to get better :20

The jury is still out on the Packers ground attack.  But the Packers at least took a positive step forward with what they have.  Whether they add to their roster via trade remains to be seen.  But it’s almost a certainty that GM Ted Thompson won’t do a deal if he has to give up too much to do it.