You are here: Home / News / AARP unrolls the scroll 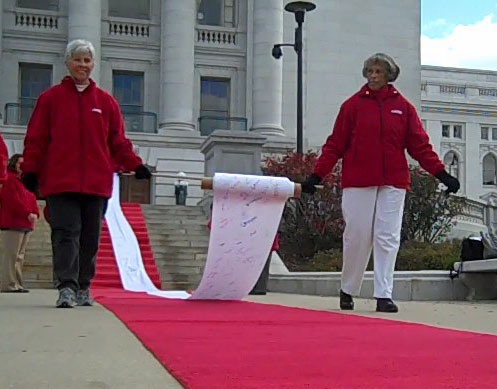 AARP at the Capitol PHOTO: WRN

AARP Wisconsin “unrolled the scroll” at the Capitol on Monday. Al Majkrzak, state President of AARP Wisconsin, said health care, the federal deficit, job creation and maintaining and strengthening Social Security are the issues of most concern to those fifty and older. “Our issues are the issues of the country. We say what we do, we do for all, and everyone in this country is aging,” said Majkrzak. “What is good for is good for the country as a whole I would say, the health of Social Security being one of them. For many of our members, that’s all they have to live on.”

But, said Majkrzak, people have not been happy with what they have been hearing from the political campaigns during this election cycle. “The negative campaign really irked most people.” Majkrazak commented as AARP unrolled a 120 foot scroll containing names of 1200 people who pledged to vote during stops by A-A-R-P’s “Your Voice/Your Vote” van tour across the state over the past five weeks. It’s an event that’s become something of an election year ritual at the Capitol.