You are here: Home / News / Barrett pledges to work with Walker (AUDIO) 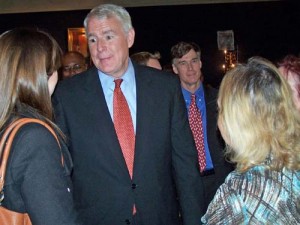 Democrat Tom Barrett talks to supporters after conceding the race for Governor.

His campaign held out as long as possible while waiting for results to come in from Madison and Milwaukee, but Democrat Tom Barrett finally had to concede to his Republican opponent in the race for governor.

Barrett told supporters gathered in Milwaukee Tuesday night that he had called Scott Walker just before taking the stage to address them. Barrett said he told Walker that he wanted to work together to address the serious problems facing the state.

Still, Barrett said his loss is not the end of the struggle for Democrats. He urged those attending his campaign rally to continue the fighting to make sure there are family supporting jobs in the state and that children get the education needed to compete in the world economy.

The Democratic candidate will continue to serve as mayor of Milwaukee, which he says still faces serious troubles of its own.

Barrett says he’s never lost faith in Wisconsin and, while the evening didn’t end the way he had hoped, it’s far from the end of the journey.