You are here: Home / Politics / Govt / Rail money could go to deficit reduction 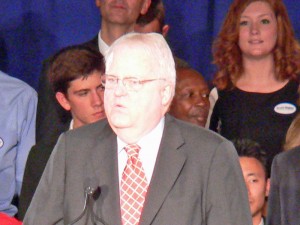 Members of Wisconsin’s Congressional delegation have introduced legislation that would allow high speed rail money to be used to reduce the federal deficit, if states decide they no longer want to pursue those projects.

The proposal would allow states to return stimulus dollars earmarked for high speed rail to the U.S. Treasury. Congressman Jim Sensenbrenner (R-WI) says it would stop other states from claiming funds Governor-elect Scott Walker wants to turn down.

Wisconsin was awarded $810 million to build a high speed rail line connecting Madison and Milwaukee. Walker campaigned on stopping the project, and has indicated he plans to follow through with the promise after he is sworn into office.

Sensenbrenner says both New York and Illinois have expressed an interest in taking the money if Wisconsin rejects the funding. However, he says they should not be allowed to benefit when states like Wisconsin try to be financially responsible.

Walker has said he wants to use the money to improve roads and bridges, but Sensenbrenner says that’s not likely to happen because Republicans in Congress plan to do away with earmark spending. Also, the U.S. Transportation Secretary has indicated the money can not be diverted to non-rail projects under current federal law.

Sensenbrenner says voters have made their opposition to high speed rail clear and Congress should act to “kill this thing once and for all.”