You are here: Home / Politics / Govt / Walker working to stop the train 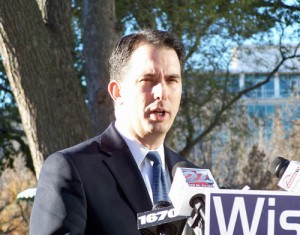 Governor-elect Scott Walker says he will find a way to stop a high speed rail line between Madison and Milwaukee.

Governor Jim Doyle in recent days has moved to finalize many of the contracts for the train before Walker takes office, possibly locking the state into construction of the high speed rail line. The Governor-elect believes it’s still possible to reverse that action.

Meeting with reporters on Wednesday, Walker says they’ve had “lawyers coming out of the woodwork” with possible legal action they can take to put the brakes on the $810 million project.

Even though contracts may already have been signed before he takes office, Walker says those deals could be changed without the state taking too much of a financial hit. He says the majority of contracts being talked about would likely go to Wisconsin companies, which he believes would be willing to work with his administration on the issue.

Walker says they’re examining all options right now and will be sorting through them in the coming days.