You are here: Home / Badgers / Badger trio is set to face TCU

Montee Ball, James White and John Clay could be described as the straw that stirs the Wisconsin football drink.  And they don’t mind 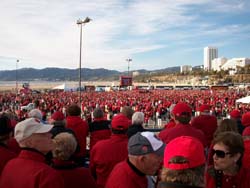 sharing the running load either.  All three will be on hand to try to help the Badgers beat TCU tomorrow in the 2011 Rose Bowl.

White is just a freshman, but led the trio in rushing this season with 1,029 yards and is second in rushing touchdowns with 14.

John Clay is second in yards with 936 and third in rushing touchdowns with 13.

Montee Ball had 17 rushing touchdowns and is third in yards with 864.

Together, the three make up the Wisconsin backfield and they push each other for playing time and simply to allow everyone to get better.

Of course, the Badgers huge offensive line is a big part of their success.

The success of this group of running backs has included several factors.  But the one that stands out is their ability to get along and check their ego’s at the door.

TCU brings the nation’s top ranked defense to the Rose Bowl tomorrow, so the task won’t be easy.  But Ball, White and Clay are ready for the challenge and ready to share the load, with the main goal, a Rose Bowl title.