You are here: Home / News / Looking for answers on high speed rail 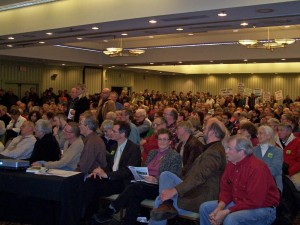 Avid supporters of high speed rail dominated an informational meeting in Madison Tuesday night, even though a proposed line connecting Madison and Milwaukee was not the focus of the event.

The meeting is part of a series of sessions being held around the state to outline a study being conducted by the Wisconsin and Minnesota Departments of Transportation on viable routes for a high speed rail line connecting Milwaukee and the Twin Cities.

Over 300 people packed a hotel ballroom for the event, and a question period was dominated by those voicing their frustration over Governor-elect Scott Walker’s pledge to stop a passenger rail line connecting Milwaukee and Madison. Those few who rose to question the project were met with jeers from audience.

Donna Brown with the Wisconsin DOT had to repeatedly tell supporters that the future of the Madison to Milwaukee line won’t be known for sure until after Walker is sworn into office in January. If Walker stops the project, a consultant says efforts to examine potential routes will still be useful if work ever picks up again.

Supporters of the rail line held a rally before the meeting started, where they continued to express hope that the Governor-elect will rethink his position about rejecting federal funding for the project. Madison Mayor Dave Cieslewicz urged Walker to slow down, get into office, and look at ways to save the project for Wisconsin.