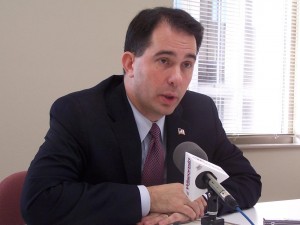 Changes could be coming to the state Department of Commerce, under a proposal from Governor-elect Scott Walker.

Walker wants to replace the Department with an Economic Development Corporation. It would take over the job creation programs currently handled by Commerce, while the regulatory duties would either be eliminated or passed on to other state agencies.

Walker says the change would allow the EDC to focus specifically on commerce in the state of Wisconsin, along with creating new jobs and keeping current employers in the state.

The Governor-elect says the change is needed to streamline the process for businesses looking to grow in Wisconsin. He says many businesses, particularly small business, are frustrated that the agency in charge of promoting commerce currently is also in charge of regulating it.

Walker says the change would also allow the state to respond quickly to businesses that are looking for an incentive to come to Wisconsin or are thinking about moving out of the state.

The public and private partnership would be run by a 12-member board of directors. Appointees would be selected by the Governor, who would also serve as chairman.

Walker will introduce the bill as part of a special session on job creation he plans to call next week, after he’s sworn into office on January 3rd.