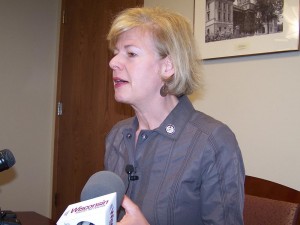 At an event in Tucson, Arizona on Saturday, a gunman opened fire on the crowd killing six people and wounding 14 others, including Democratic Congresswoman Gabrielle Giffords (D-AZ). The incident is prompting other members of Congress to rethink their own security.

Wisconsin Congresswoman Tammy Baldwin (D-WI) says the shooting is a terrible tragedy, and her prayers are with those impacted by the assassination attempt.

In a meeting with reporters Sunday afternoon, Baldwin said Congressional leadership and U.S. Capitol Police held a conference call with lawmakers Sunday, where they discussed the need to reevaluate security. The Madison Democrat gave credit to House Speaker John Boehner for calling it an attack on all members of Congress, and urging members to stand together and reconsider the incendiary rhetoric that has become more common in politics.

However, Baldwin says the attack will not prompt any changes in her public schedule. She says her staff is always concerned about security and coordinates with local police when setting up events. She says her doors will remain open, although they will do the best they can to review safety and security concerns when meeting with the public.

Police have the shooter in custody and do not believe the attack was part of any larger plot targeting members of Congress.