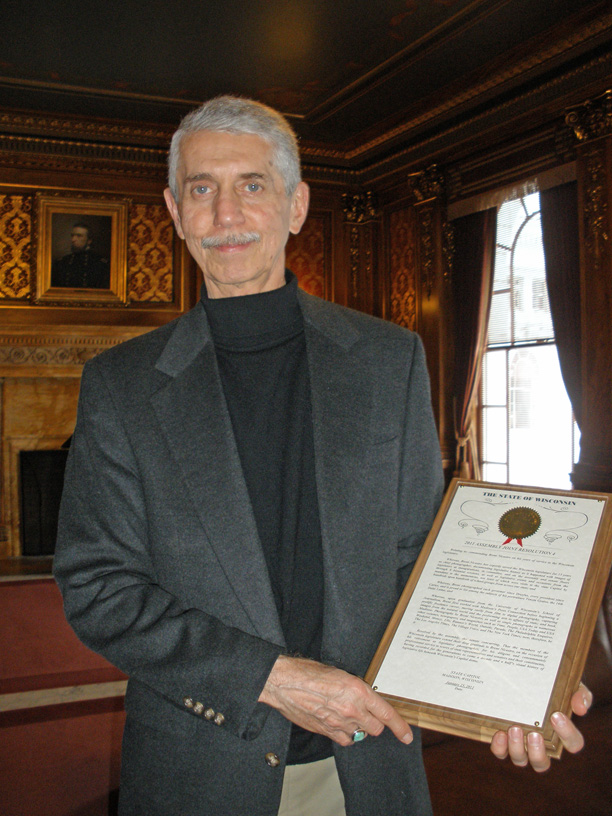 You probably don’t know his name, but if you’ve been to the state Capitol, odds are you’ve seen him around.

Many of his pictures are in the official state Blue Book; some of those post cards in the gift shop were taken by him; and the multitude of kids touring the state Capitol building have likely been photographed by him — and those kids probably have a postcard image as a memento of their visit.

“I’ve probably photographed somewhere in the vicinity of 15,000 fourth graders.”

Wisconsin Capitol Chief Photographer Brent Nicastro is retiring after 15 years on the job. On Tuesday, the state legislature officially recognized the camera man who, according to an official commendation, has photographed everything from the “mundane to the momentous,” including “each governor since Dreyfus,” and “every president since Carter.” Nicastro shot portraits of lawmakers, committee hearings, constituent visits, inaugurations, and tree-lighting ceremonies.

The longtime photog says his favorite part of the job was listening in to the floor debates while shooting photos of lawmakers. “I liked listening to both sides of the issues; there was always a lot of passion involved. That makes for good photos, in my opinion, you know, when people are really feeling intensely about what they are speaking about. It just makes good photos.”

A big part of his job is to be a visual archivist for the state, but he also he needs to make the lawmakers look good. So, Nicastro says you won’t being seeing any pictures of disheveled-looking lawmakers with bloodshot eyes after an all-nighter at the Capitol.

He especially loved photographing the 14th Dalai Lama, which allowed him to get up close and personal, but the encounter is probably not documented as Nicastro is a lot happier behind the viewfinder rather than in front of the lens.

His 1999 book on Madison photography is being updated and republished by UW Press.