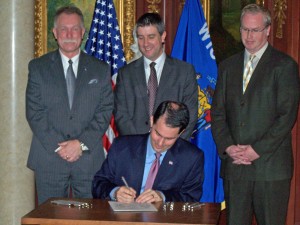 Businesses will have new safeguards against liability lawsuits, under a bill signed into law by the Governor on Thursday.

Governor Scott Walker says the measure will make it easier for businesses to operate in Wisconsin without the fear of being targeted by frivolous lawsuits. He says the legal climate in Wisconsin has made companies fear being sued or forced to reach costly settlements.

The measure includes caps on punitive damages, creates a higher burden of proof for filing a lawsuit, and puts new restrictions on the types of expert witness testimony that can be used in court.

Critics argue the changes will shield businesses from being held responsible for actions that harm people. Walker says they are meant to create a balance, and argues those who do wrong will still be penalized.

The Governor says the changes are needed to create a more business friendly legal environment, which he hopes will lead to job creation.