You are here: Home / Packers / Bennett drives players with a ring

Green Bay Packers running backs coach Edgar Bennett has been wearing his Super Bowl ring around this week, letting it serve as a 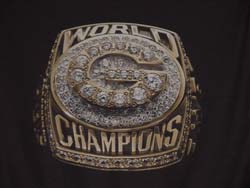 Bennett was a starting halfback on that team.  He acquired a ring as a player and now he’s after one as a coach.  We asked Bennett what the ring means to him.

AUDIO: Edgar Bennett explains the meaning of a Super Bowl ring to him :17

Bennett hasn’t had the ring on for practice or most of the media obligations in Dallas, but he has wore it much of the rest of the week.  He said wearing the ring is special.

Bennett said he only wears the ring on special occasions, and this he considered a very special occasion with a chance to give his players a history lesson.  The Packers may have a team that’s built to contend for a Super Bowl title for the foreseeable future, but Bennett knows one thing, you have to take advantage of the opportunity when it presents itself, because you just never know when it’ll happen again.

AUDIO: Edgar Bennett says the Packers have to cash in now :13

Bennett suffered a torn achilles’ tendon in the Packers first preseason game following their Super Bowl victory and he never played for the Packers again.  The Packers went back to the Super Bowl the next year and lost to the Denver Bronco’s in Super Bowl XXXII and that is what Bennett is talking about when he said you can’t take anything for granted.