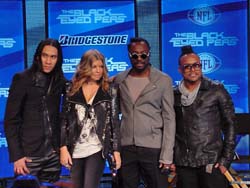 Sunday.  They’re expected to be joined by R & B superstar Usher and Guns & Roses guitarist Slash.

The band spoke at a news conference in downtown Dallas and they’re hoping to heat things up in a city that has been hit with ice, snow and cold all week.

Band member Fergie said what won’t heat up is the wardrobe.  She said there will be no malfunctions on her end.

AUDIO: Fergie says she’ll keep it clean with the wardrobe :10

Keith Urban and Maroon 5 will perform during the pregame festivities and Christina Aguilera is set to sing the National Anthem.  Lea Michele of “Glee” will sing “America the Beautiful.”