The Black Eyed Peas were the headliners of the NFL Super Bowl XLV halftime show and by most accounts, they performed well. 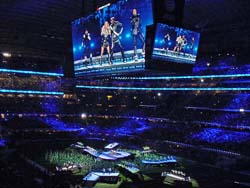 Fergie, the first female to appear in a Super Bowl halftime show since Janet Jackson in 2004, had no wardrobe surprises.  She joined former Guns N’ Roses guitarist Slash, performing the band’s song “Sweet Child o’ Mine.”

Usher dropped in from the ceiling as well, performing a duet on his hit “OMG” with Black Eyed Peas will.i.am.

The Peas’ performance ended the same way it began, singing their hit “I gotta Feeling”.

Christina Aguilera messed up the words to “The Star-Spangled Banner”.  Lea Michele, who stars in the Fox show “Glee”, sang “America the Beautiful.”