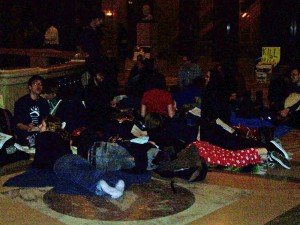 Protestors camp out in the Capitol rotunda (PHOTO: WRN)

Testimony before the Joint Finance Committee on Governor Scott Walker’s budget repair bill stretched into the early hours of Wednesday morning, with many protestors camping out in the Capitol rotunda waiting for their turn to speak.

Legislative staff estimated up to 700 people registered to speak on the bill, with the vast majority opposing its passage. Much of the public testimony focused on union-related provisions in the legislation, which would limit the collective bargaining rights of most public employees to wage issues and require state workers to contribute more to their pensions and health care benefits.

WEAC President Mary Bell described the bill as a far-reaching and devastating attack against the rights of those who have dedicated their lives to teaching. She says the measure has very little to do with fixing a state budget deficit.

Speaking around 7:30 Tuesday night, public defender Christian Echenlaub noted that lawmakers had heard from no supporters of the proposal in almost six hours. That held true through the rest of the hearing with almost all speakers asking lawmakers to “kill the bill.”

Civil engineer Julie Brooks said the proposal is just about sticking it to the workers by taking thousands of dollars out of their paychecks. Many of those testifying talked about how the loss in pay could force them to leave their jobs, lose their homes, or keep kids out of college.

After about 9 pm, the JFC co-chairs cut off sign-ups from the public to testify on the bill. The move prompted cries of protest from Democrats on the committee and chants of “let us speak” from those waiting in the hallways outside of the hearing room.

Co-Chair Robin Vos compared to the long list of sign-ups to a “citizen filibuster” intended to stall the process. Democratic leadership say it’s simply a sign of how strongly people oppose the measure and promised to remain in the Capitol until all voices had been heard.

The lengthy hearing continued amidst an air of protest around the Capitol. Many UW students and teaching assistants filled the rotunda in sleeping bags while studying and playing cards through the night.

The Joint Finance Committee is expected to return to the Capitol later today to vote on the proposal.