You are here: Home / Politics / Govt / Citizens hold vigil at the Capitol 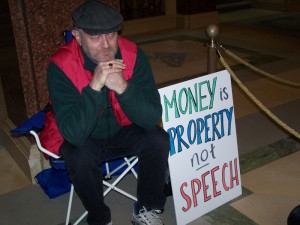 A report released earlier this week by Wisconsin Democracy Campaign found only one-percent of the state’s population funded the campaigns of state politicians last fall. Director Mike McCabe says that means the other 99-percent of Wisconsin residents are not being given a voice.

The Campaign launched a citizen vigil at the Capitol Thursday, which McCabe says is intended to keep alive the idea that government should be working for the “greater good” of the state.

McCabe says they want to focus a spotlight on the influence of special interests. He says those standing vigil need to get the word out to the rest of the state about what’s going on, as lawmakers cater to the rich and powerful.

McCabe says they hope to have people on hand for each day the Legislature is scheduled to be in session.