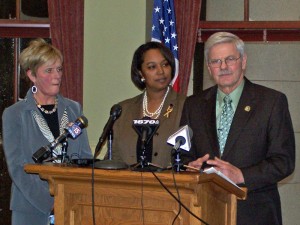 Democrats say Governor Scott Walker State of the State address offered some big talk about the need to address budget problems facing the state. However, party leaders in the Legislature say the Governor came up a little short in laying out his plans to make that happen.

Senate Minority Leader Mark Miller (D-Monona) says Walker’s half hour speech was full of cheerleading and pats on the back, but lawmakers did not really hear much about what hard decisions they will need to make in the coming weeks.

The Governor called on lawmakers to act on a budget repair bill he hopes to introduce soon. Democrats say they are worried that will require sacrifices mainly from the middle-class, with cuts to programs such as Medicaid, BadgerCare, and unemployment compensation.

Governor Walker also announced plans to begin work on Milwaukee’s Zoo interchange earlier than expected and with a savings of $600 million. Assembly Minority Leader Peter Barca (D-Kenosha) says the project is one that needs to move forward, but expressed concerns that it could delay work on another stretch of I-94 between Milwaukee and the Illinois border. Barca says those improvements are also badly needed.