You are here: Home / Legislature / Fitzgerald: no negotiating with Democrats (AUDIO) 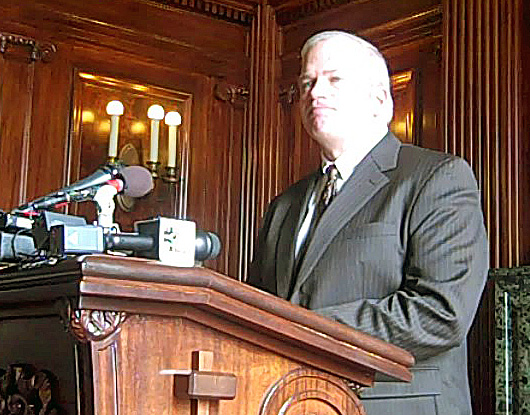 One of the 14 Senate Democrats hiding out in Illinois said Friday that they’re talking with Republican Senate Majority Leader Scott Fitzgerald about breaking the Senate impasse over Governor Scott Walker’s budget repair bill, but Fitzgerald said there are no negotiations. “He did reach out to us, to a degree,” said Senator Dave Hansen of Green Bay, the Assistant Minority Leader. “So we’re hoping against hope that there’s some common sense action that’s going to happen. We’re holding strong, and there’s no deadline set, and negotiations are continuing.”

Fitzgerald was asked following Friday’s floor session, whether there was any room for negotiation. “No, absolutely not,” he said. “We’re even stronger now since the Assembly vote last night. There’s no negotiating on this bill at all.” Hansen told Appleton radio station WHBY that he believes Senate Republicans aren’t 100 percent behind the governor’s proposal. “They do not like what is happening,” he said. “And I think it’s evidenced by the four Republican Assemblymen saying ‘this is just wrong.'” Four GOP Assembly members did vote against the bill early Friday morning.

“I don’t think there’s any doubt in anyone’s mind that there are rock solid 18 Republican Senators that are ready to vote for this bill,” said Fitzgerald. “We’ll be here waiting for final passage. We will negotiate the terms of what that will look like, that floor period, there’s no doubt about it. I’m not allowing them to come back and just go on ad nauseam, after they checked out on the process.”