You are here: Home / Packers / Hawk is only Packer headed for surgery

Green Bay Packer linebacker A.J. Hawk has been battling a chronic wrist injury and will have off-season arthroscopic surgery.  He’s the only Packers player that will need surgery.

Wide receiver Jordy Nelson has spent the past couple of days on crutches. 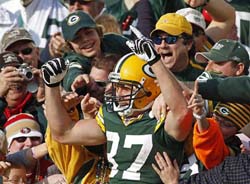 Mike McCarthy said Nelson suffered a bursa sac injury in his left knee during the 4th quarter of the game.  Nelson will not need surgery.  Treatment calls for ice and rest.

Cornerback Charles Woodson suffered a broken left collarbone in the Super Bowl, but will not require surgery to repair it.

Sam Shields suffered a shoulder sprain and will be examined further later this week.