You are here: Home / Packers / It won’t be long for McCarthy now 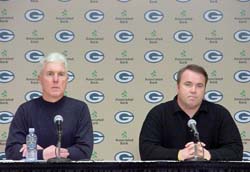 Mike McCarthy to a contract extension.

Thompson just completed his sixth season as the head of football operations.  He’s helped the Packers reach the playoffs in 3 of the last 4 years, including the organizations fourth Super Bowl title a week ago.

Since taking over the general manager duties in 2005, Thompson has built through the draft.  Of the 53 players on the Super Bowl roster, 49 were acquired by Thompson, including 26 coming via the draft.

During the past four seasons, the Packers have gone 40-24 (.625) during the regular season.

Thompson’s deal was orchestrated by team president/CEO Mark Murphy.  Thompson in turn is responsible for extending McCarthy’s contract, which is no doubt in the works already.