You are here: Home / Legislature / Lawmakers take a time out (AUDIO) 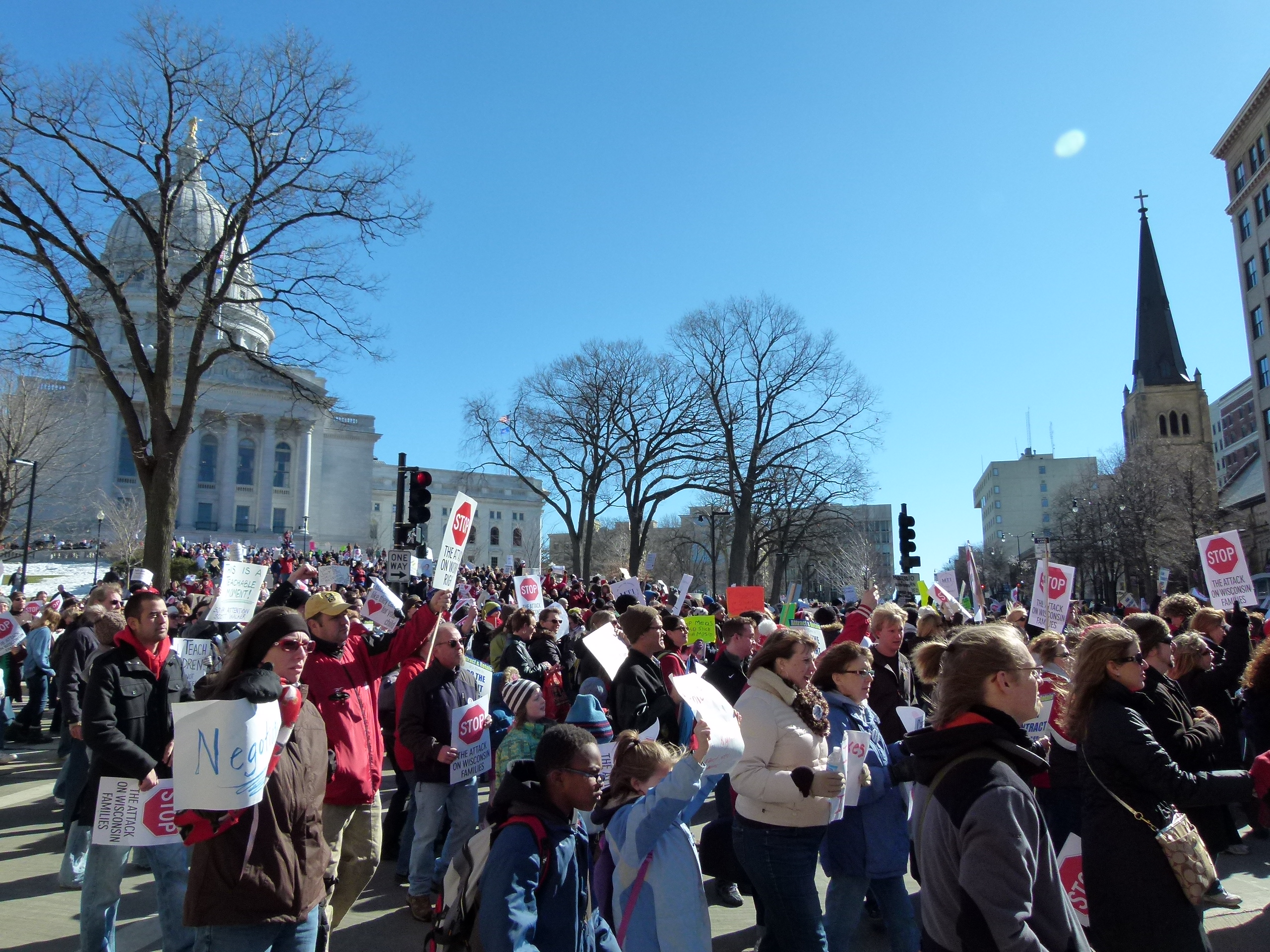 Day five of protesting at the capitol. (PHOTO: Jackie Johnson)

As protests raged in the Capitol rotunda for a fifth day, lawmakers in both the Senate and Assembly adjourned Friday without taking any final action on Governor Scott Walker’s budget repair bill.

Senators took the floor Friday afternoon briefly, in order to adjourn their session until the chair calls them to come back. The chamber will be unable to vote on the bill until at least one Democratic Senator can be brought to the floor because of a requirement for 20 members to be present. Republicans only control 19 seats.

Senate Democrats remained in Illinois on Friday, after leaving the state Thursday to block a vote. Leadership says they do not plan to return to the state until the Governor is willing to negotiate on provisions that would strip most collective bargaining rights from public employees. Senate Majority Leader Scott Fitzgerald (R-Juneau) says he has tried to reach out to Democrats, but has received no response.

The remaining Senators did approve a resolution that grants the Governor a one week extension on delivering his budget message to the Legislature. The Assembly on Friday also approved the resolution. Governor Walker’s office then announced that he has rescheduled his budget address from this coming Tuesday to March 1st.

In the Assembly, lawmakers were told to be back on the floor at five Friday evening. Just a few minutes before that time, as Democrats were making their way to the chamber from a partisan caucus, Republicans made a move to advance their version of the budget repair bill to a final vote. Democrats then rushed the floor and demanded to be heard.

State Representative Gordon Hintz (D-Oshkosh) was among several who angrily spoke on the floor against the Republican action, accusing the GOP of trying to prevent them from having a chance to change the bill.

An emotional state Representative Kelda Helen Roys (D-Madison) urged Republicans to reconsider their action, assuring them that they will win and be able to pass the bill, but Democrats deserve a chance to offer amendments to the proposal for debate. Roys comments came as angry protestors gathered outside the Assembly chamber, with their voices growing louder by the minute.

Assembly Speaker Jeff Fitzgerald (R-Horicon) eventually relented, saying Republicans only moved forward with a voice vote because they did not think the Democrats would actually show up on the floor. Shortly after sending the bill back to the amendable stage, lawmakers adjourned the session until Tuesday morning so Democrats could have more time to work on their amendments.

Speaking with reporters after adjournment, Fitzgerald said the decision was also influenced by the massive protest rallies from unions and their supporters that have stretched throughout the week. Fitzgerald says he had concerns about the safety of his members, although he would not elaborate on any specific threats.

The Speaker says he fully intends to return to the floor Tuesday morning and take a final vote on the budget repair bill.

Lawmakers leave the Capitol as crowds of protestors are expected to swell over the weekend. Opponents of the bill are to continuing their vigil in the coming days, and TEA Party groups will rally in support of the Governor as well on Saturday.