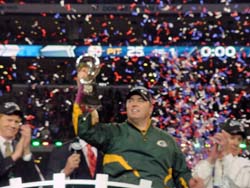 McCarthy should be coming soon after the Packers beat the Pittsburgh Steelers 31-25 in Super Bowl XLV on Sunday night.

Both Thompson and McCarthy have two years remaining on five year contracts that each received after the drive to the NFC Championship game in January of 2008.