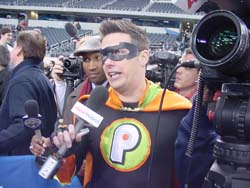 purpose.  But yesterday’s event at the new Cowboys Stadium showed once again how ridiculous the event has become.

It’s no longer about football and hasn’t been for some time.  Discussion of Super Bowl 45 and the match-up between the Packers and Steelers won’t actually get into full swing until today when the two teams practice for the first time since arriving in Dallas on Monday.

If you’re a real journalist looking to talk football, you picked the wrong gathering.  Instead, you get the likes of the cape-wearing “Pick Boy” from Nickelodeon.  It’s an event where no question is a bad question.  In fact the bizarre is welcomed and almost encouraged.

Some players have fun with it, others would rather skip the event.  But at this point, all publicity for the NFL is good publicity when it comes to Super Bowl Media Day.  That means you can expect this event to continue for years to come.