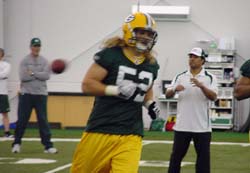 Polamalu had 7 interceptions and 63 tackles this season for the Steelers.

The NFL Network was set to announce the award during a 6pm broadcast, but when a reporter saw Matthews getting ready to do an interview with the Network, he reported on Twitter that Matthews had won.

The problem is, Matthews didn’t.  The first reporter jumped to a conclusion and several credible media outlets then jumped in line spreading the news.  The correct announcement came near the end of the 90-minute show on the NFL Network.

Matthews tallied 60 tackles and 13.5 sacks during the regular season.  He’s since added 3.5 sacks in the playoffs, totalling 17 for the season.