You are here: Home / Sports / Pond Hockey in Eagle River is a big hit (AUDIO) 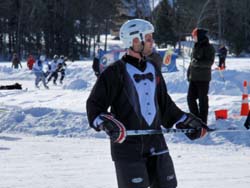 The 6th annual event was played over 3-days on 24 rinks with roughly 1,750 players.  Players came from 25-states and the District of Columbia.

There was plenty of skilled players for the casual fan, but watching this large group of competitors really reminded me of one massive “beer league softball” tournament.

The participants came to play some hockey and have a good time.  One female team wore hockey socks that looked like fishnet stockings.  Men wore skirts along with their normal hockey wardrobe.  One team even had hockey jersey’s that looked like tuxedo’s.

Being a hockey fan helps, but it’s definitely not mandatory.  The excitement in the air was unbelievable.  Skill levels varied, but that wasn’t important.  The players had a blast and those that stopped by to watch did to.

I was there  because my son played in a local youth hockey tournament.  We had heard about the Pond Hockey event and knew we wanted to check it out.  We’re certainly glad we did.  The weather was fantastic and the snowmobile Capitol of the World added another reason for people to visit the beautiful Northwoods of Wisconsin.