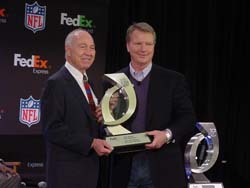 Rodgers finished in the top 10 in nearly every major passing category this season, with 3,922 yards passing (7th), 28 touchdowns (T-6th), a 65.7 completion percentage (6th), forty 25-yard passes (2nd) and a 101.2 passer rating (3rd).  Rodgers’ 3,922 passing yards this season brought his total in three seasons as a starter to 12,394, ranking second in NFL history for the most passing yards by a quarterback in his first three seasons as a starter.

Rodgers and Charles were selected from a panel of three finalists in each of their respective Air and Ground categories.

Hall of Fame quarterback Bart Starr accepted Rodgers award on his behalf.  Rodgers couldn’t be there because he was attending practice with his team.