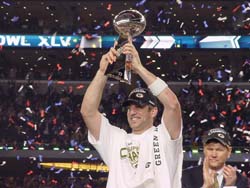 Steelers.   His numbers could have been much better had it not been for several dropped balls, including one by James Jones that looked it had touchdown written all over it.

Rodgers is the second Green Bay quarterback to be selected as the Super Bowl MVP.  Bart Starr was the MVP of the Packers’ victories in Super Bowls I and II.  When Rodgers was asked after the game about carving his own legacy in the post-Brett Favre era, Rodgers praised the organization for standing by him instead.

AUDIO: Rodgers said the organization believed in him :18

Rodgers MVP numbers came against a Steelers defense that allowed an average of 14.5 points a game all season.  That is number 1 in the NFL.  He finished the game with a passer rating of 111.5 and now has a career passer rating of 112.6.

Rodgers is only the third QB to pass for 300-plus yards and three touchdowns without an interception in a Super Bowl.  Joe Montana and Steve Young are the others.

Rodgers ended the postseason with 1,094 passing yards and 9 touchdowns.