You are here: Home / Weather / Round two of snow looks to be brutal 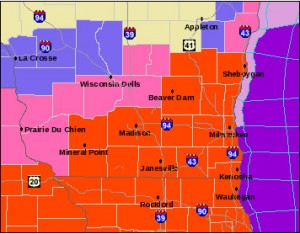 Wisconsinites in the southeast corner of the state are facing what could be the nastiest snowstorm in decades. Meteorologist Chris McGinness of WDJT-TV in Milwaukee is forecasting 15-to-20 inches of snow will fall, including the first wave that began Monday. He expects the Illinois border communities in Walworth and Kenosha counties to see the most with totals as high as two feet, beginning this evening.

The storm is coming from the south and is centered in Indiana meaning those border communities are closest the weather system. Additionally those areas will be hit hard by lake effect snow.

McGinness is confident that southern, especially south east Wisconsin, will see blizzard conditions, which is defined as sustained winds of at least 35 mph, and reduced visibility from snow up-to-a-quarter-mile, for three hours or more.

Grocery and home improvement stores have seen increased business since word of the monster storm got out. People are taking the predictions serious, which is good, according to Racine County Emergency Management Coordinator David Maack.

Maack says if winds get upwards of 50 mph from the east, as predicted, there could be flooding along the Lake Michigan shoreline.