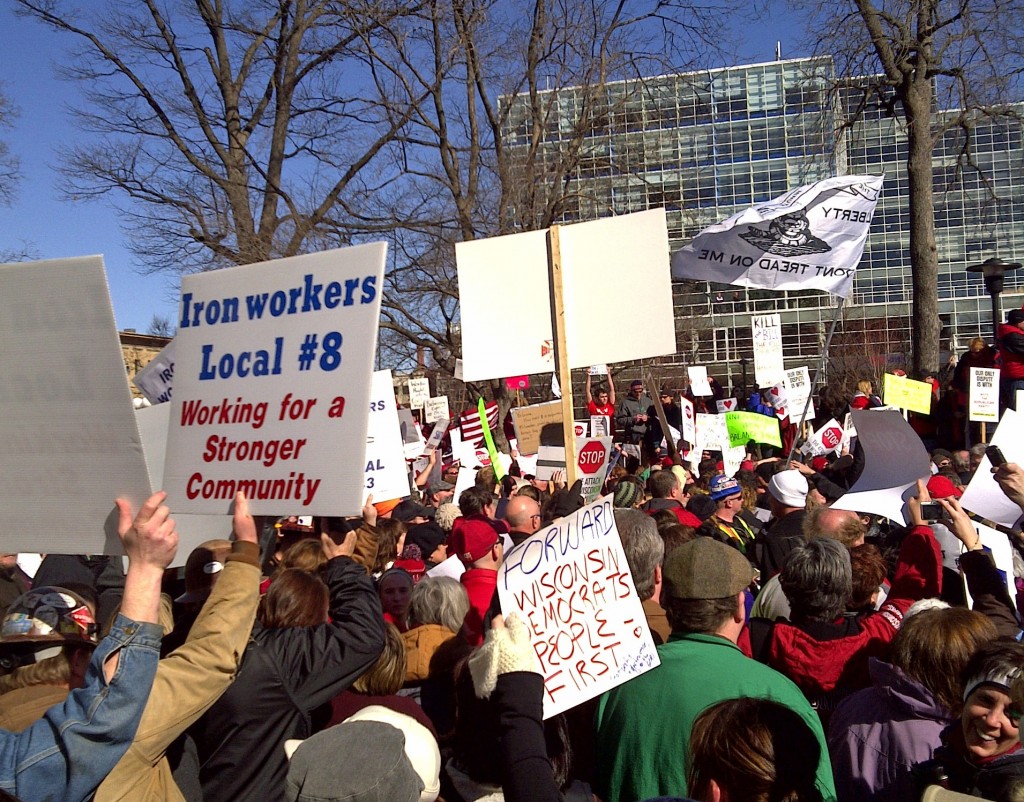 With the sounds of protesters outside clearly audible in his Capitol conference room, Governor Scott Walker took questions from reporters Friday afternoon. Walker was asked his reaction to President Barack Obama’s statement that his budget repair bill is an assault on unions, and that the DNC’s campaign arm, Organizing for America, is on the ground in Madison. “I think the President of the United States has his hands full balancing the federal budget deficit, they have big problems there. He should stick to balancing the federal budget,” said Walker.

Walker was asked again to justify his decision to drastically reduce the ability of public employee unions to bargain collectively. “The bottom line is, and again as a local government official I can tell you, if you’re going to see major cuts in aid to local governments, which is exactly what’s going to come and what I’ve said going to come for some time, and what nearly every other governor across the country is doing, the only way I can ensure to the public in this state, that those cuts aren’t going to lead to massive layoffs of teachers, city, county, local government workers, major cuts in core services at the local level, is if those local governments have the authority to set their pension and benefit levels the way we’re outlining in this bill.”

Walker’s office announced Friday that his state budget address, which had been scheduled for next Tuesday at a Madison business, would instead be delivered on Tuesday, March 1st at the Capitol. Simply put because of what’s happened with the 14 members of the state Senate Democratic Caucus,” Walker explained. “We’re not certain exactly when the Senate’s going to be able to come back in and take the vote. There’s a majority of members who are ready to vote, and to vote for that measure, just as there is in the Assembly. Unfortunately, the members of the state Senate who, out of those 14, let me remind everybody 13 of them two years ago voted for the budget adjustment bill that raised taxes by one billion dollars in this capitol, that bill was introduced on Wednesday, it was voted on Thursday. So apparently two years ago, 24 hours was time enough to raise taxes on the taxpayers of Wisconsin by a billion dollars, now a week and an unprecedented amount of 17 hours of public hearing testimony by the Joint Finance Committee, is not long enough. The reality is, they’re not doing their job, they belong back here just like all the state workers and county workers and local government workers across the state, who I appreciate went to work today to do their job. The state Senate needs to do their job and until they do, we’re going to wait, because it is imperative that we get this done first.”

Thousands of union members and their supporters are expected at the Capitol again Saturday, and a national Tea Party organization, Americans for Prosperity, has also scheduled a rally. In addition, with state workers furloughed on Monday, another major rally is expected that day. Walker was asked whether he has an exit strategy. “I think ultimately the exit strategy is for the people of this state, particularly in those 14 state Senate districts who, regardless of how the feel about the bill, I think had an expectation whether their Senator was elected last November or two years prior, have a very sincere expectation, that the people they sent to serve in the state Capitol, are people who ultimately will show up and do their job,” the governor said. “People talk about Democracy. You can’t participate in Democracy if you’re not in the arena. The arena is not in Rockford Illinois, the arena is in Madison, Wisconsin, and it’s time for those senators to come home. Now if they want to debate this, if they want to discuss this, if they want to argue the merits of their position, come offer amendments, come offer discussion. But hiding out in another state is not a way for Democracy to operate. A handful of people among a minority, don’t get the right to drive the majority here. They should have every right to be heard, and they would be afforded that opportunity if they showed up to work.”