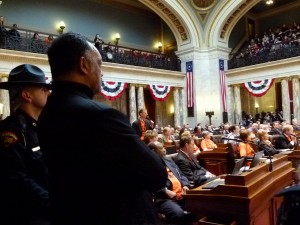 A day of turmoil at the state Capitol wrapped up Thursday afternoon, with the state Assembly giving final approval to a modified version of the Governor’s budget repair bill. The bill passed on a 53-42 vote, despite numerous calls from Democrats to stop an assault on middle class families by removing many collective bargaining rights from public employees.

The Assembly was initially delayed in getting to the floor because protesters staged a sit-in outside of the chamber. The situation prompted a Capitol lockdown for several hours. Lawmakers, staff, and the media were kept from entering the building while police dealt with the situation. Eventually, protesters were dragged out of the Assembly antechamber by police and the doors to the Capitol were reopened.

During the debate, Democrats argued the modified bill with fiscal provisions removed would do nothing to close the deficit in the current state budget. Lawmakers argued the vote was nothing more than an effort to strip away the rights of public employees. State Representative Cory Mason (D-Racine) said you can’t take away the rights of people just because unions support Democrats during the November elections.

Republicans stood by their claims that the changes are needed to give local governments more flexibility in dealing with the cuts in the Governor’s biennial budget. The bill cuts over a billion dollars in local aid. Republican Representative John Nygren (R-Marinette) says it will help prevent thousands of government workers from being laid off, which he says would be unacceptable.

The vote on the bill came abruptly at the end of just over two hours of debate. Republicans had said early on they planned to limit discussion, which also prompted a call from Democrats to remove Assembly Speaker Jeff Fitzgerald (R-Horicon) from his position. Republicans criticized the move as nothing more than a stall tactic and the motion was eventually defeated.

The Assembly was acting on a conference committee report on the budget repair bill, which was approved by the Senate on Wednesday night. The version of the bill now on its way to Governor Walker removed the fiscal policy items from the original legislation.

The move was necessary to get it through the Senate because Democratic Senators left the state to prevent a vote. Senate rules require 20 members to be present for votes on bills with a fiscal impact, but Republicans only control 19 seats.

The Senate passed the bill on an 18-1 vote, with Senator Dale Schultz (R-Richland Center) the only no vote. In the Assembly, four Republicans did vote against the bill; State Representatives Dean Kaufert (R-Neenah), Lee Nerison (R-Westby), Richard Spanbauer (R-Oshkosh), and Travis Tranel (R-Cuba City). All four voted against the original version when it passed in the Assembly last month.

Following the vote, Republicans quickly left the floor as protesters in the gallery and rotunda chanted “shame!” at them. Capitol police cleared a path for lawmakers to then leave the building.

The bill now heads to Governor Walker, who is expected to sign it quickly. However, Democrats say they are working on a legal challenge to how it was moved through the Legislature.