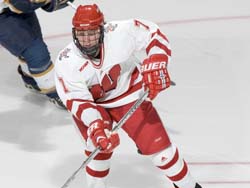 Wisconsin’s Hilary Knight evened the score early in the second period on a Badger power play and the game remain tied until Duggan scored the game winner with 13:26 remaining.

With the win, the Badgers advance to the 2011 NCAA women’s Frozen Four in Erie, PA., where they will face No. 4 seeded Boston College (24-6-6) at Tullio Arena on Friday, March 18.  UW is making its fifth Frozen Four appearance all-time.

No. 2 seed Cornell and No. 3 seed Boston University will face off in Friday’s other semifinal, and the winners will advance to Sunday’s national championship game at 1pm CT.