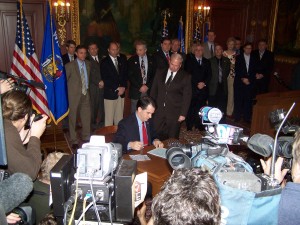 At an afternoon signing ceremony, Governor Scott Walker touted the jobs to be saved as in his budget repair bill which includes 1,500 middle class jobs this year and up to 12,000 such jobs over the next two years.

While critics have called the bill “union busting,” Walker mentioned public sector unions among his “partners” in economic development.

The Governor is not concerned with the pending open meeting statute lawsuits. Democrats claim Senate Republicans violated the law Wednesday by hastily calling committee, paving the way for the bill’s approval in the chamber. The Governor says GOP leaders consulted with the Senate Chief Clerk, who’s served under both Republican and Democratic majorities, on the procedure.

The Governor also dismissed a possibility of losing majority standing with a massive recall effort against numerous lawmakers. Walker says much of the “attacks and distortion” is largely funding by national union bosses. He says Wisconsinites will soon realize the changes are simple, public employees will be contributing more to the pension and health care but far less than their private sector counterparts.