You are here: Home / Crime / Courts / Capitol access in court 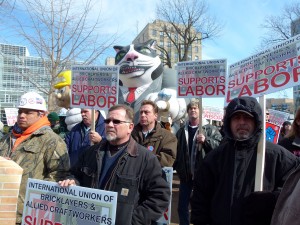 A lawsuit being argued in Dane County court calls for the state Capitol building to be reopened to the public. Circuit Court Judge John Albert began hearing arguments Tuesday afternoon in the case, which was filed by several union groups seeking to end restrictions on access to the Capitol building.

Another judge issued a temporary restraining order earlier in the day calling for public access to be restored. However, those filing the lawsuit claim it is being violated because the general public still does not have free access to the Capitol.

Assistant state Attorney General Steven Means argued in court that the Department of Administration is complying. He says there are security measures in place similar to those used in a courtroom, which are designed to keep the building safe.

Current restrictions to enter the Capitol include limits on the number of people allowed inside at any one time, limiting entry to people who are attending public hearings or meeting with lawmakers, and closing the building overnight.

A small group of protesters has defied those orders, occupying the rotunda since Sunday. Several thousand people were also outside of the Capitol for the past two days demanding entry to the building.

AFSCME Council 24 executive director Marty Beil took the stand Tuesday, where he testified that the building should be open to anyone who wants to enter at any time. Beil says the Capitol belongs to the people and they should have access at all hours.

During Beil’s testimony, Means began laying the groundwork for the state’s defense with questions about noise levels, people sleeping in the Capitol, and general health conditions. Means also brought up reports of animals being seen in the building, people eating there, and unofficial childcare areas for demonstrators.

Testimony in the hearing is expected to resume today.