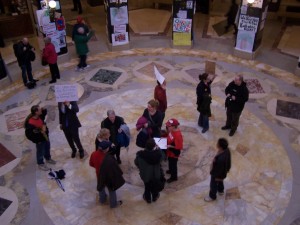 The only protestors at 9am (PHOTO:Brian Moon)

It was a quiet morning in the State Capitol, following a Dane County judge’s ruling Thursday that requires public access during business hours but allows for banning overnight stays.

About 30 protestors slept outside last night among them Elias Growth of Madison.  Despite living a mile away he stayed on capitol grounds to oppose Governor Walker “completely trying to dismantle it (Wisconsin) and take advantage of hardworking people.”

Walker’s says the cuts, offered in his budget repair bill for the current two year cycle and his proposal for the next budget, are necessary to fill massive deficits.

The building opened up at 8 A.M. along with security procedures including metal detectors and bag searches. Sleeping gear, musical instruments and noisemakers are among items no longer allowed. Demonstrators are now restricted to the ground floor rotunda and as of 10 o’clock only about a dozen had gathered.

Among them was Brian Ronk, a clean shaven Madison man wearing a suit in response to state Senator Glenn Grothmann’s comments of protestors being “slobs.” He holds a sign reading, “WI: Open for Business CLOSED for everything else,” a take on Governor Walker’s early slogan to lure companies to Wisconsin.

Department of Administration Security Mike Huebsch, says in a statement, some of the procedures will change on Monday when DOA issues a permanent plan on rules and rallies within the capitol.

UPDATE: The number of protestors continues to grow as more enter the building.