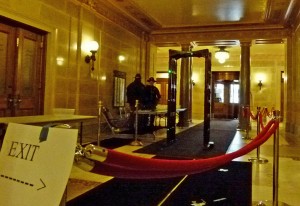 A security checkpoint at the Capitol. (PHOTO: Jackie Johnson)

It’s been almost two weeks since large scale protests surrounded the state Capitol building each day and three weeks since a judge ordered the building fully open to the public again. However, one lawmaker says extreme security measures remain in place and they are discouraging people from visiting the seat of government.

Currently, public access to the Capitol is restricted to two entrances, compared to the eight normally open during the day. Visitors must pass through metal detectors and submit to searches before they can enter.

State Representative Cory Mason (D-Racine) says there have been no indications why those policies are still needed, with only a few protesters entering the building on any given weekday. He says it’s time to give the people their Capitol back.

The Department of Administration says current policies do comply with a court order to keep the building open to the public while still working to protect the safety of those inside in the Capitol. A spokeswoman says the agency is working to balance the rights of visitors to assemble and ensure the safety of those inside. They are also meant to keep government operations continuing as normal.

DOA says no decision has been made yet on when extra security measures will no longer be needed.

Mason says the security in place right now is more restrictive than the response to the September 11th attacks almost a decade ago. He says they are an overreaction to massive peaceful demonstrations against the budget repair bill. He worries that their continued use is part of a plan to keep the Capitol on lockdown for some time to come.

The tighter security is also having an impact on a common type of visitor to the Capitol each spring. The end of the school year usually brings a flood of fourth grade government classes from across the state. Mason says one class from his district spent over a half an hour getting through security this week, which greatly reduced their time to visit. Another group from Racine has already told him it plans to cancel its visit, rather than deal with the extra security.

Mason says it makes him wonder how much of a threat fourth graders are to the safety of the Capitol.