Wisconsin senior Meghan Duggan and junior Hilary Knight are among the 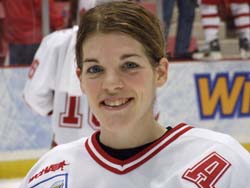 The Patty Kazmaier Memorial Award is given annually to the top player in NCAA Division I women’s ice hockey.

This marks the fifth time multiple Badgers have been in the top 10 together.  Sara Bauer (2006) and Jessie Vetter (2009) are the two Badger award winners.