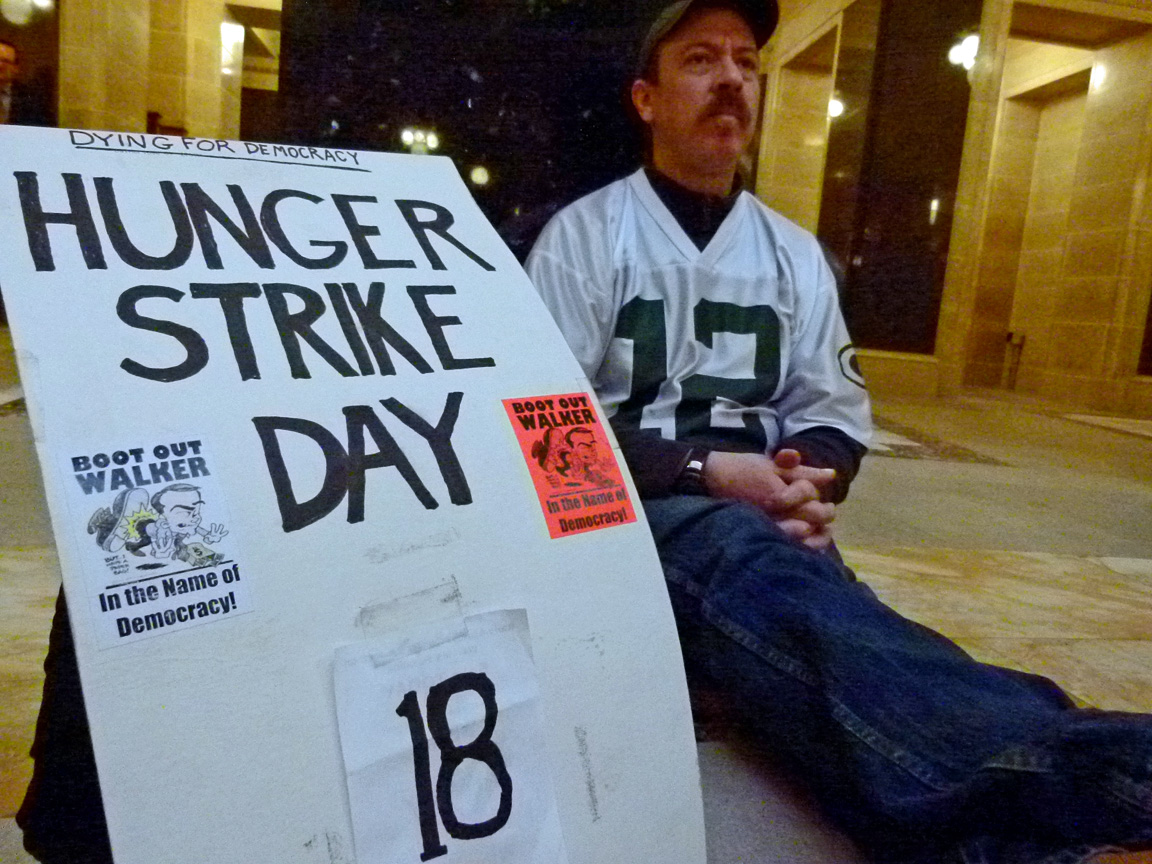 Schauenburg sits in the rotunda during his hunger strike (PHOTO: Jackie Johnson)

One Madisonian is showing his solidarity with state union employees, as he enters day 21 of his hunger strike at the Capitol.

Matthew Schauenburg is not eating anything, he says, until the governor restores collective bargaining for government employees, and initiates discussions with Democrats on fiscal matters of the budget repair bill. “Talking and picketing was not achieving any desired results. So, the game had to be stepped up.”

A temporary restraining order prevents the legislation from being published, but Schauenburg says that’s just the first chapter; there’s plenty more yet to be written. He says, he doesn’t plan on quitting his protest any time soon. “If at some point I collapse and am hospitalized, medical personnel, I’m sure, will give me fluids intravenously and I’ll be back here the next day. I have no intention of backing down from my stance whatsoever.”

Schauenburg estimates he has already lost about 20 pounds. He says medical personnel frequently check-in on him, giving him medical advice. So, how’s he feeling? Pretty bad, he says, periodically cold, week, and shaky, and it’s increasingly more difficult to focus. While passing the time with a book, he finds himself re-reading the same paragraphs over and over again.

Schauenburg drinks water and takes potassium chloride for his heart. No other vitamins; no food. Although, he says, it may become necessary within a couple of weeks to take electrolytes to make sure he’s “mobile and lucid.”

Schauenburg says he hasn’t had any contact with the governor, elected representatives or union officials.

Governor Scott Walker signed the bill (Act 10) that makes public employees contribute more for their benefits — 5.8 percent of their salary to the pension fund and 12 percent for monthly health insurance premiums on March 11, 2011. Walker touts those contributions as being far less than what their private sector counterparts have been paying.