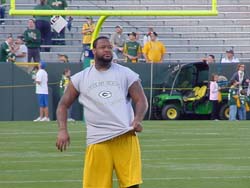 possession of a controlled substance, will remain in a Houston jail until at least Wednesday.  That’s when his postponed initial appearance is scheduled to take place.  Jolly’s request for bond was rejected by a Harris County judge on Monday.

Houston police arrested Jolly on Friday after allegedly finding 600 grams of codeine in his Cadillac Escalade.

The 28-year-old Jolly entered a pretrial diversion agreement with Harris County last year over a similar allegation.  The agreement deferred prosecution in exchange for a promise by Jolly to remain out of trouble, among other conditions.

The NFL suspended Jolly for at least the 2010 season on the first charge.  He was eligible for reinstatement after the Super Bowl last month, but had not been reinstated to date.