You are here: Home / Legislature / Penalties dropped against Senate Democrats 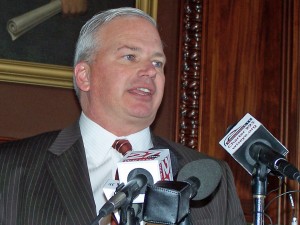 Senate Republicans say they are taking steps to rescind penalties and fines imposed on Democrats during the three weeks they were in Illinois. Majority Leader Scott Fitzgerald (R-Juneau) says the move comes as they try to get the Senate back to work on the important issues facing the state, along with the upcoming biennial budget debate.

Fitzgerald on Monday told his members that Democrats were still considered in contempt of orders to return to the Senate to vote on the budget repair bill, which would prevent them from voting on bills before legislative committees. That prompted outrage from Democrats, with Senator Fred Risser (D-Madison) calling the move “petty and childish.”

Fitzgerald on Tuesday said he now has assurances from Democrats that they will remain in the state and allow debate on other issues to move ahead. As a result, Republicans began taking steps to lift the penalties, which included putting Democratic staff under Republican supervision, cutting off direct deposit for paychecks, and $100 a day fines for missing floor sessions.

Fitzgerald says it was pretty clear those penalties did not entice Democrats to return to the state. The 14 Senators only came back to Wisconsin over the weekend, after Republicans last week made a sudden move to strip out the fiscal policies from the budget repair bill and passed the rest, including a provision stripping public employees of most collective bargain rights, without the Democrats.

It was thought Democrats would still be held in contempt until the Senate returned to the floor next month for its next session day. Fitzgerald says he is working with the clerk to find a way to lift the order without requiring a roll call vote.

Until that happens, Senate President Mike Ellis (R-Neenah) says lawmakers will not be stopped from voting in committees and he hopes this will bring back civility and decorum to the chamber.

Senate Minority Leader Mark Miller (D-Monona) says Republicans made the right move in lifting those penalties, calling it an essential step in getting back to work.